If you are looking for Die Hard, you came to the wrong place.

Once and for all, Die Hard is not a Christmas movie!  Just because it takes place during the holiday season, doesn’t mean it is a holiday staple.  James Stewart is probably rolling over in his grave with the thought of a Christmas classic like It’s a Wonderful Life being compared to an action movie chock-full of blood and death.  What’s next?  Bruce Willis’ famous “Yippee-ki-yay, MF” line being the new “Merry Christmas?”  These days, not much left in the world is pure and innocent.  Can we at least keep Christmas classy, folks?  Anyway, I’ll get off my soapbox.

There have been several amazing Christmas movies made in the history of cinema.  The aforementioned It’s A Wonderful Life is a timeless treasure about the value and preciousness of human existence through the spirit of Christmas itself.  Another one of the most popular Christmas films of all-time is A Christmas Story.  I mean, it literally airs for 24 hours straight on some cable networks during the holiday season.  A Christmas Story is so effective because everyone can relate to a character in the story, and everyone can reminisce about their own family’s Christmas traditions.

How the Grinch Stole Christmas, Rudolph the Red-nosed Reindeer…the list of Christmas standards goes on and on.  However, I’m a child of the 1980s, so a lot of these benchmark films were made before my time.  I wanted to focus solely on the Christmas movies made in the last 30 years.  That way, the debates about the best Christmas movies ever can be pigeon-holed into a smaller sample size.  After all, I don’t want to spark arguments around the holiday table between the ol’ heads and the young’ns, comparing classics that were made over 60 years apart.  The more I think about it, this shouldn’t really spark much debate anyway, since this article is more of a recommendation piece than a rankings one.

If you have children and want to begin a new seasonal tradition with them, or you’re a person 30 years old or younger who just wants to feel a little nostalgic, or if you are simply just a curious reader and lover of the holiday season, here’s a list of my personal favorite Christmas films (in no particular order).

I will admit that, although I said this list was not made in order and this article was not about my rankings, these two are my top favorites.  Made in 1990 and 1992, respectively, both of these are classics in their own right and are definitely “click and stick” material.  For those of you who are not familiar with that phrase, it simply means that when you are channel surfing and see that either of them are on, you “stick” around and watch them.  I remember when my mom took me to see the first Home Alone in theaters, and I have been enjoying it ever since that day.  It’s also rare to make a solid sequel to a classic, but Chris Columbus did just that with Home Alone 2.  It’s so much fun to watch Kevin McCallister outlast and outwit the Wet Bandits over and over again.  Laughing at Harry and Marv’s failures never gets old.  Speaking of old, watching these movies makes me wish Macaulay Culkin could stay eight years old forever.

What’s better than the legendary cast of Muppets acting out their rendition of A Christmas Carol?  There have been myriad of Christmas Carol remakes, but I honestly believe this one is the best and most fun by far.  Not only were the Muppets fantastic, but Michael Caine KILLED IT as Scrooge (I’m hesitant to admit this, but of all the legendary roles Caine has played in his illustrious career, I still always see him as two people: Scrooge and Alfred from the Christopher Nolan Batman series).  The storytelling is awesome and the songs throughout the film are catchy.  I would not let my family leave the house growing up as a child on Saturday mornings until the Muppet Babies cartoon was over, so maybe I am a little biased here.  Sue me if I am!  The Muppet Christmas Carol is well-balanced with adorable scenes for kids mixed with hilarious jokes and adult innuendos for their parents to enjoy as well.

This selection comes from the “it’s so cheesy, it’s awesome” category.  Nobody is going to label this movie as a timeless masterpiece, but damn is it funny!  I know I’m not the only person who finds Arnold Schwarzenegger running around town as this All-American dad turned psycho in search of an action figure for his son highly comical.  On top of that, throw Sinbad of all people into the equation to be his nemesis and primary competition in the Turbo Man chase. Jingle All The Way is rowdy and full of action and laughter for kids.  Adults, there’s plenty for you to LOL with this one, too – even if you are laughing at the movie for all the wrong reasons.  In fact, to maximize the enjoyment level, I’d suggest you watch this movie after a few drinks and REALLY crack up.

Contrary to my reasoning behind Jingle All the Way being on this list, this one is a legitimate cinematic success. Based off of one of the most popular children books ever, The Polar Express delivers heartwarming emotions through a stunning visual masterpiece.  It’s a great movie with invaluable lessons for children.  The vision of Robert Zemeckis in the creation of this movie is uncanny, as he did a superb job of bringing the reader’s exact visual interpretation of the book right onto the big screen.  On top of that, casting Tom Hanks (aka America’s “cool dad”) in this movie was a brilliant, cerebral move that paid off both in our hearts and at the box office. 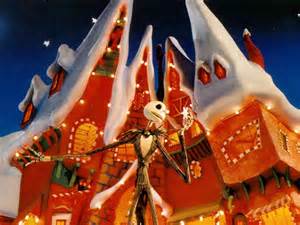 Jack Skellington is still the boss of all bosses.  Over 23 years later, and this haunting, yet beloved character has strongly withstood the test of time.  I feel like not a day goes by where I don’t see Jack stitched on someone’s book bag, tattooed on someone’s body, or rocked on someone’s t-shirt.  Tim Burton is a dark, weird (in an absolutely endearing way) man…but he is also undeniably brilliant.  His vivid stories and characters are going to be around long after we are gone.  Burton also managed to blur the line and somehow create a Halloween and Christmas movie all in one.  Who does that?! It raises the question – is it a Halloween movie primarily with Christmas infused, or a Christmas movie primarily with Halloween infused?  Either way, it was well-done and deserves props all year ’round.

It’s a great time of year to nestle up by the fireplace, or get comfortable on the couch with your loved ones and watch a good holiday flick.  Whether you share some favorites with me, or have a set of your own, I hope you enjoy them now as much as you did the first time you discovered them.  Have a safe and wonderful holiday!